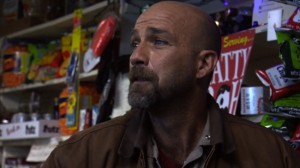 Nice mention of Kevin Gage in Laid to Rest at Horror Squad. “The best things about Laid to Rest are the gore — which is gruesome and ever-present — and Kevin Gage. Gage took a lot of flack for appearing in the awful Chaos, but he redeems himself here. He’s a likable character, and you start to really root for the guy to survive til the end credits as the film progresses.”

Thankfully, in real life Kevin Gage is much more of a Tucker than a Chaos.