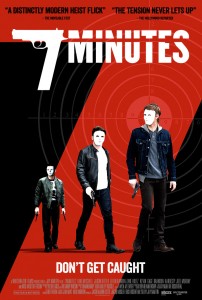 The sharply conceived visual style is another positive feature of the piece. Characters are introduced with bold hard-hitting freeze frame lettering reminiscent of 90’s UK thrillers Snatch and Trainspotting. Comparisons could also be drawn with older westerns such as High Noon and Sergio Leone’s work in producing the balanced on a knife-edge paranoid fear brought about by ever-ticking clocks of impending bloodshed.

Details from the review also mention Kevin’s character “Tuckey” as a key player.

The jumping back and forth from the past to the present of the bank job becomes more and more nerve-shredding as details emerge about each of the central players and their relationships with each other. When a truly insane criminal named Tuckey (Kevin Gage) learns of the group’s plans and attempts to get a piece of the action, the proverbial truly hits the fan.

Sam Moffit of We Are Movie Geeks also rates 7 Minutes 4 out of 5 stars, saying that it “runs a tight hour and 27 minutes and the tension never lets up…. All the actors are excellent and function with Swiss watch timing.” He adds:

The feeling of desperation, of characters living a hopeless life in a small town with no future is overwhelming. 7 MINUTES is in the same league with Small Town Murder Songs, Texas Killing Fields and A Simple Plan.