GamerHub.TV published an interview with Kevin about his role as Rorke in the popular Call of Duty: Ghosts video game. Here are some excerpts: 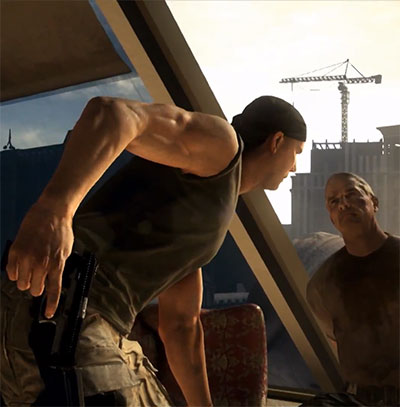 Actor Kevin Gage is used to playing an antagonist in Hollywood. The 56 year old actor has made a living off television and movie roles in which he’s on the wrong side of the law. Gage brings to life the latest Call of Duty villain, former Ghost Gabriel Rorke, in the new Infinity Ward blockbuster. The game’s already made over $1 billion worldwide in a record 24 hours on current gen and is coming out on Xbox One on November 22. Rorke plays a big role in the game’s epic campaign mode. The actor talks about bringing the Call of Duty: Ghosts villain to virtual life in this exclusive interview.

How did you approach the character of Gabriel Rorke?

I’m not a method actor, even in the movie things that I do…. For me it really is all common sense. I don’t do a lot of heavy research or practicing. I go with my first instincts and usually they’re on the money. Thank God for directors, including Call of Duty. They’d give me direction on where they would like this character to be. I think I got hired for the job because they heard that military cadence, so I really didn’t have to prep a whole lot. It’s easy for me to do that delivery. And when it comes to the evil thing, unfortunately I’ve smoked cigarettes for 40 years and that abusive habit has made it very easy for me to go down to that dark place.

Read the entire article on GamerHub Call of Duty: Ghosts Interview With Villain Kevin Gage or on the Chicago Tribune website.