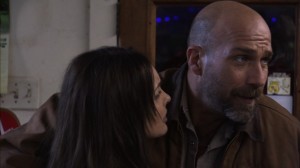 Reviewer at Digital Vault likes the film’s special effects, but pays particular attention to the characters. “Gore isn’t the only thing going for the film, however. The film’s protagonists — the girl, the trucker with a bum leg (Kevin Gage), and the uber-nerdy computer whiz (Sean Whalen) — are actually likable, a quality which is absent from 99.9% of the slashers on the market. Everyone else, well, they make good targets for Chrome Skull.”